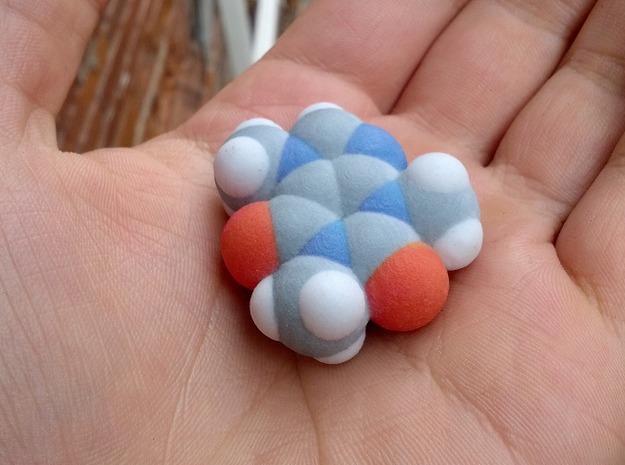 This is from the perspective of a Shapeways shop owner, the producer of 3D models. Amplifying productivity is satisfying, and we can write a computer program that gives you 3D modeling superpowers by automatically generating and publishing models on your Shapeways store.

This allows us to publish thousands of models with zero extra labour at the margin, and perhaps some of them will sell.

Shapeways provides an API to access their catalog for publishing models. First, a generic Python library was written to access this interface.

JMol was then used to provide a source of molecule models. JMol can retrieve from a central molecule structure database based on the molecules name. Additional some parameters can be specified for the model appearance and file format.

Integrating the two of these is done in a high level script, which reads a list of molecule names, generates the model, and then publishes the result in the Shapeways store. This script re-initializes the entire Shapeways catalog when it is run, allowing all state to be kept locally.

A good metric for success is profit made by the Mostly Molecules Shapeways store. This is driven by a revenue - costs = profit relationship. Shapeways charges a base price for each model, and allows the creator to specify a charge above this that is paid to the creator when a model is sold. So creator surcharge * units sold = profit.

Currently, "creator surcharge" is set to $0 and units sold is 9. The current profit is $0.

Get notification of new articles via email: